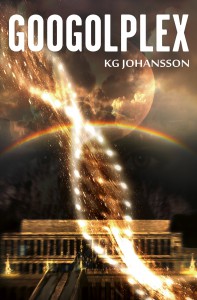 ”Full of genetics, clever allusions, and above all an interesting examination of human nature, Googolplex tugs at the imagination long past its final sentence.”
World Literature Today

”I emerged from the book with a soft and sated ‘wow.’ It is a thing of intellectual beauty. Not easy to slide into, but once in, once ‘clicked,’ it is a deeply satisfying and fascinating read. ”
The Future Fire

”Googolplex is the breed of science fiction that uses science to explore our humanity. It is not always an easy read, but it is incredibly rewarding and a good catalyst for self-examination and philosophical reflection. … I highly encourage you to grab a copy, sit back, and enjoy the ride.”
GeekDad

Swedish author KG Johansson was born in the fifties, grew up with rock music and became a musician. Today he plays and writes full-time – science fiction and young adult novels, film scripts, opera libretti and music books – and is one of the foremost authors of speculative fiction in Scandinavia.